This is a story of how I modified a bleeding edge (at a time) Athlon computer for silent operations. I still have a long way to go to totally fanless configuration, but this is what I have been using in my bedroom for 6 months.

The information on this page has the potential to cause both harm to your PC and to your health if applied carelessly. I believe that in some jurisdictions, the types of PC modification discussed here may be prohibited by law.

Under no circumstances will the author and/or publisher, the author/publishers' families, friends, lawyers, lawyers' families, chiropractors or greengrocers be responsible for any injury, loss or inconvenience caused directly or indirectly by the application of any of the information provided in this article. This material is offered as entertainment only.

3. Modifying the case and PSU

First of all, lets record the starting point here. Idle, case open on the side and on the top, power supply has still both of its fans and the CPU cooler has its Papst fan. CPU is still running at 1533 MHz.

At this point I drill the holes to the bottom of the case, remove the power supply fans and install the case side plate. The case is now open from bottom drilling holes, from a big empty place on the back that had the power supply and the top plate is missing. I can feel the burning heat on the power supply. 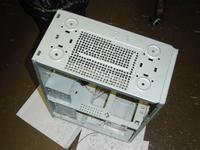 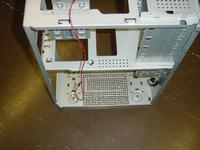 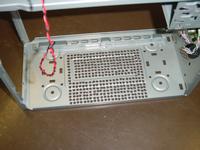 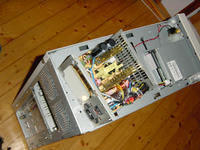 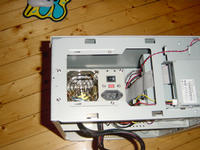 An oven thermometer I put into the power supply has settled to 48 °C. Enermax EG465P-VE specifications allow operating temperature 25°C for full rating of load (431W), decreasing to zero Watts O/P at 70°C. With linear interpolation this would still give at 48°C an output of 250W. This should be enough. I measured the input current to the power supply. When idle it shows around 0.38 A (230 VAC), and at 100% CPU load as described earlier plus DVD-ROM activity it shows at maximum 0.48 A. Therefore the maximum average input power is 110 W. Peaks maybe reach above that, but I guess that should not matter.

With 100% CPU load, mixed integer (gcc kernel compile) and floating point (artificial calculations) I get these measurements after a night of load:

Clearly the CPU fan is doing its job spectacularily, only about 4 deg between motherboard and CPU temperatures. The worrying thing is that air is not really moving as I would have hoped just with thermal convection. One reason might be that I have very narrow space between the floor and the case bottom, which has the air intake holes.

I added some books under the feet of the case, so that now there is 10 cm between the bottom intake and the floor. This made a small difference: now the temperatures alter around 50-51 and 54.5-55.0. After covering the back hole they are around 50-51 and 54.0-54.5. Now the air has only one route and this helps some. 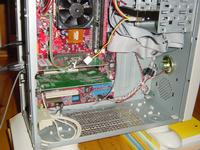 5. Modifying the motherboard for lower voltage

There are some well known articles about lifting the core voltage for overclocking purposes. They mention a HIP6301 chip usually near the voltage regulators and cpu socket on a motherboard. This chip is also present on 6380v2. The pins 1 thru 5 are the VID5 thru VID0 respectively (note the reverse order), so I soldered five leads of a flat cable strip to these pins, and attached some connectors to the other end of the wires. Then I took the 5V lead from a floppy power connector and attached a 1 kilo-ohm resistor to it. Now I can put a 1 to the HIP6301 VID input by connecting a VID lead to this pull-up resistor, and 0 by connecting it to the ground lead of the floppy connector. 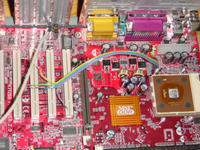 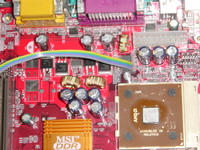 You only need to connect the leads you need to change from the default, which is for AthlonXP VID0,1,3,4=1 and VID2=0.

In BIOS, you have to set the core voltage to Auto.

I tried to lower the voltage more at first, but finally after long test runs of compiling Linux kernel the lowest totally stable setting was 1.700 V. This gave the reading of 1.66 V on sensors on average, but I do not see any noticeable improvement in temperatures this time.

One thing this voltage mod teached me is that with fanless air circulation, anything obstructing the free air flow costs you a couple of degrees C in CPU temperature! Even a small plastic bag, which I used to cover exposed wires on my prototype voltage hack. When I removed that, the temp dropped back again.

I have not been very active on writing my experiences for the last six months or so, but I'll try to sum up here what I have done.

Before I completely remove the CPU fan, I decided to test the fan with 5V supply instead of 12V, the nominal for the Papst fan. It really makes a difference in sound, while not completely unaudible it is really impossible to hear it even in very silent bedroom conditions at night. The hard drive spinning has more noise, and that is very little as the drive I have is a Seagate Barracuda ATA IV. The drive is currently not in any enclosure, though I have plans to put it in one.

The CPU is underclocked to 800MHz, which is the lowest you get with an AthlonXP 1800+ CPU with 266MHz FSB and multiplier setting 6.0. I am perfectly happy with the temperatures, which are around 56°C for the CPU under full CPU load.

While I have a design rule of being able to cope with full continuous CPU load, there are ways to put your Athlon XP cpu to sleep while idle and this way to lower the idle temperatures dramatically. Just executing these two lines in linux gives the KT266A chipset commands to disconnect the FSB and let the CPU to fall asleep. In my experience this lowers the CPU temperatures around 15 degrees C. Really remarkable!

To disable the features again:

This is only an additional improvement to the system when it is ready. It has to take the full load when encoding files etc, but this for example lowers the risk of fire when the machine is left unattended for weeks.

I have not yet tried removing the fan altogether, though once I accidentally disconnected the fan while I was running at the CPU at the nominal 1533MHz. When I noticed this, the CPU was running fine at 107°C and everything was working well. I am really happy with this Swiftech heatsink!

My plan is to remove the fan, modify the Swiftech MC462-A heatsink sonehow to have longer fins somehow, and running the CPU at 800MHz. I am not sure what to do with the heatsing, as the optimum would be to have one with very long and thick fins, with wide enough gaps to let the air flow freely as there is no fan to forcibly drive the air to thight places. Probably I will bend the existing spikes a bit to all sides as far as the MSI KT266A motherboard design permits.

Another option is to replace the Athlon CPU with the latest Durons. They should consume half the power and therefore produce half the heat the Athlon does with its large L2 cache. Also the smaller cache in Durons probably does not matter with MPEG-2 playback or MPEG-4 encoding. This would have been an optimal staring point to begin with, but I wanted to experiment with an Athlon and I got what I wanted!

I am sure a lot of readers have a lot of better ideas about how to reach the goal of silent PC. I would like to hear about all of these! Still, there are some ideas that I already am aware of and I would like to answer to the obvious questions about them.

Why are you not using Intel Pentium III or AMD Duron or Cyrix C3 or some mobile variant of them? Why go for one of the most power hungy CPUs there is?
Because I wanted to. AMD CPU's were and still are a best buy with respect to price/performance ratio. Durons would have been even better in this respect, but I wanted to experiment with the Athlon just to show off what can be done with it. Intels cost too much and do not perform similarily and Pentium IV is even more power hungry than Athlon. Cyrix is hard to come by and is also lacking on performance.
Why not use water cooling?
Whatever you say it is too complex a solution for me. I do not want to come home and find a lot of water on my floor some day. I want to be able to leave the machine recording TV shows for a month or more while I am having a holiday. Air cooling with only passive components is less likely to break down.
Why not put the PC on another room or a closet?
I want to access the machines DVD drive and have all the video, antenna, keyboard, mouse, network etc. cabling easily available.

http://www.cocoon-culture.com/lib/noise-report/external-docs/shutup.htm
I got the idea of removing the fans from an ordinary PSU from here.
http://www.swiss.ai.mit.edu/~pmitros/projects/silence/
A lot of good links to articles of silent systems. I know this page is going to move to http://www.circuit-hacker.org/silence/ but I could not connect to that site.
http://hyvatti.iki.fi/pictures/kone
Some pictures of the case and motherboard modifications.